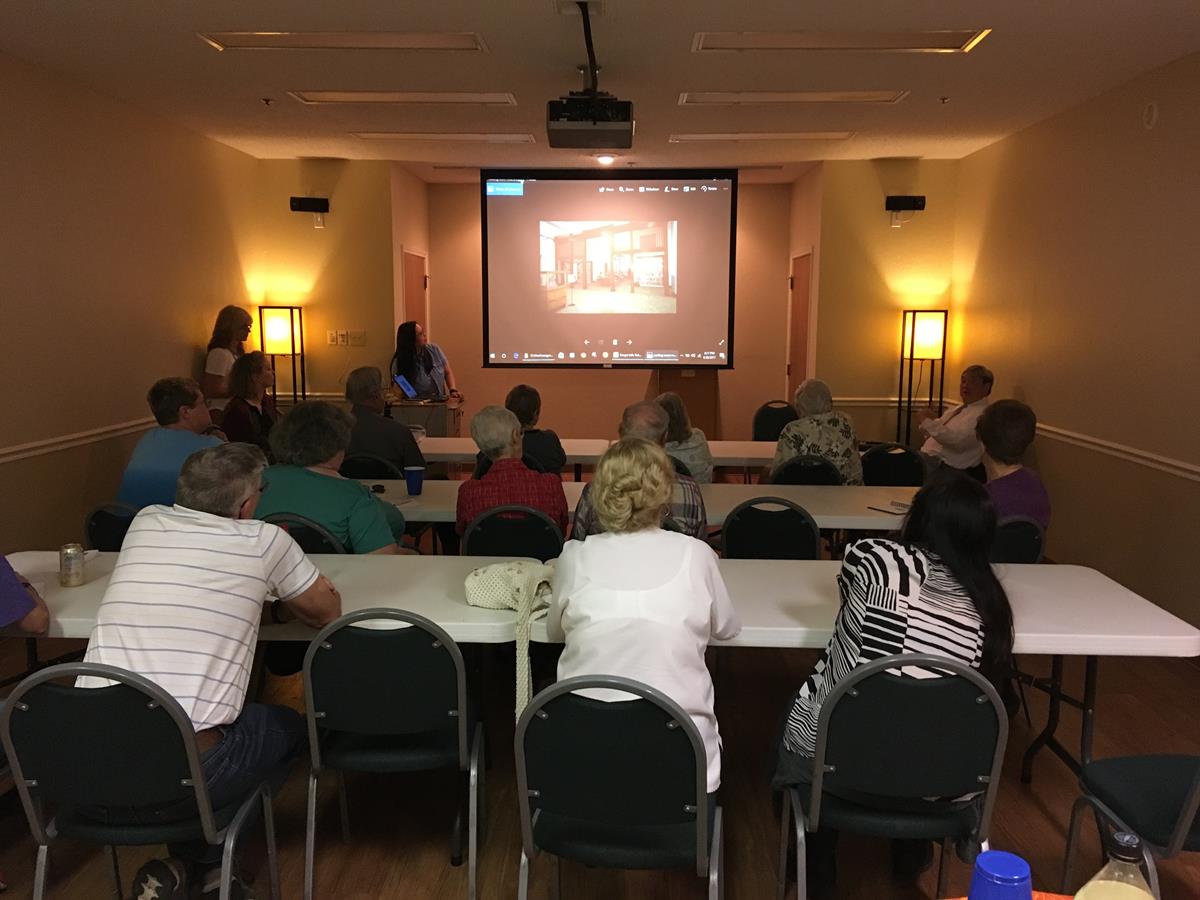 Karl Komatsu and Amy Sibley of Komatsu Architecture presented a public information session on June 20th (pictured to the right) to engage the community and library patrons on the future of the library. They began by showing their recent library projects in Fort Worth and Brenham as a way to start the discussion on library features and the Sanger community. Sanger Public Library staff also shared photos of libraries we've visited or used to show different ways that libraries reflect and engage their local communities.

Sanger Public Library developed and conducted an in-depth community survey from June 28th, 2017 until August 11th, 2017. We received 120 responses: Half of the surveys were completed or turned in at the library and the other half were done online through our website, Facebook page, or emails from the library and Friends of the Library.

Five key questions from the survey are summarized below.

Which of the following library services have you used before?

How often do you come into Sanger Public Library?

Nearly two-thirds of respondents visit the library on at least a monthly basis. About 25% indicated that they come in weekly. The survey found that having a hectic schedule was the most common reason for someone to come into the library rarely or intermittently. Some indicated that they did not come into the library often because they found it too noisy or loud. There were also several respondents who stated they use another library that is more convenient for them, such as their school/college library or another public library near their work.

Do you support building a new library?

Respondents were asked to rate their level of support for a new library after reading a statement that included the following information:

Where do you wish a new library to be located?

Survey respondents were asked to rank their preference for the location of a future Sanger Public Library. The options were:

The information presented in this question included:

The overall preference of survey respondents was that the future Sanger Public Library remain at its present site or at least in a downtown location. The overall second choice of respondents was for east of downtown, near the high school.

This preference for a downtown location is very strong with survey respondents over the age of 40: more than 80% prefer a downtown location. However, survey respondents under 40 are far less committed to the downtown location. This demographic cast more first-place votes for areas to the east and west near the elementary or high schools. This is an important consideration due to the influx of young families into the area. The majority of Sanger Public Library cardholders are under the age of 40 and the median age of the Sanger population is now 30.

What features would you like to see in a future Sanger Public Library?

The two highest voted options were "More room for Books/Audio/Video" and a "Dedicated Children's Area." Respondents were also very supportive of additional seating areas and study rooms that would be available to individuals or small groups.

The full list of options and their voting are listed below - there were 109 responses to this question:

View an excerpt from the Community Survey (PDF). The complete document is available upon request from the library.